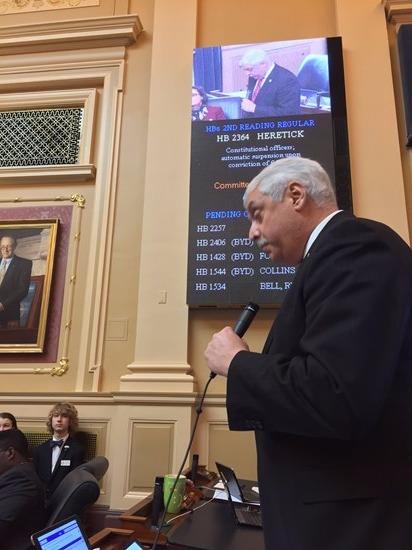 RICHMOND, Va. – The Virginia House of Delegates passed a bill proposed by Delegate Stephen E. Heretick (D-Portsmouth) that would automatically suspend any local or constitutional officer convicted of a felony.  On Monday morning, House Bill 2364 passed the House 95-1 and now heads to the Senate.

The legislation now has an emergency clause, enabling it to come into effect immediately upon the signature of Governor McAuliffe rather than the usual date of July 1st for new laws.  Delegate Heretick previously expanded the bill to make it applicable to all local elected officials in the state.  The Constitution of Virginia already provides for the removal process for other officials.

“We should all be saddened that a bill like this is necessary,” Heretick said.  “Unfortunately, some in elected office abuse the public’s trust.  I introduced this bill because just like every other citizen, I believe it is critical that we close this loophole that allows felons to remain in office pending sometimes lengthy legal appeals,” said Del. Heretick.  “An elected official who is convicted of a felony while in office should not be drawing a salary on the backs of taxpayers, exercising any lawful authority, or abusing the trust placed in them by our communities.”